Will digital audio ever outperform analog?

Since the age of CDs, debate has raged among listens over whether digital music could ever measure up to the quality of its analog predecessor. Here, we break down some of the technical realities behind both mediums to assess the reality of the situation.

Ever since the advent of the compact disc, and the widespread consumer access to digital audio that it brought, people have debated over whether or not digital audio could ever adequately replace its analog predecessors.

As downloadable and streaming digital formats have increased in prevalence and complexity, the discussion has only amplified, with many diehard analog “purists” decrying the loss of musical soul they feel is notably missing in modern digital audio formats.

But I’m not here to argue against or for the purists. Instead, let’s explore the requirements of a scenario in which digital sound could be equal to, and perhaps even surpass, analog sound. And the answer to the question, “could digital audio ever outperform analog?” actually has two parts.

We’re about to step heavily into the world of math and science, so hold onto your hats!

First, it’s important to understand exactly what the difference is between analog and digital sound.

Analog sound utilizes a continuously changing audio signal; meaning that the pressure fluctuations fed to a speaker from its signal is (at least ideally) an exact reproduction of the original sound at every moment in time.

Digital sound, on the other hand, is made up of a series of discrete steps in its audio signal that change quickly enough that they give the illusion of a continuous signal when fed to a speaker. This is very similar to the way a video is made from a series of still images that are cycled through fast enough to give the illusion of smooth motion (hence the original phrase “motion pictures”). 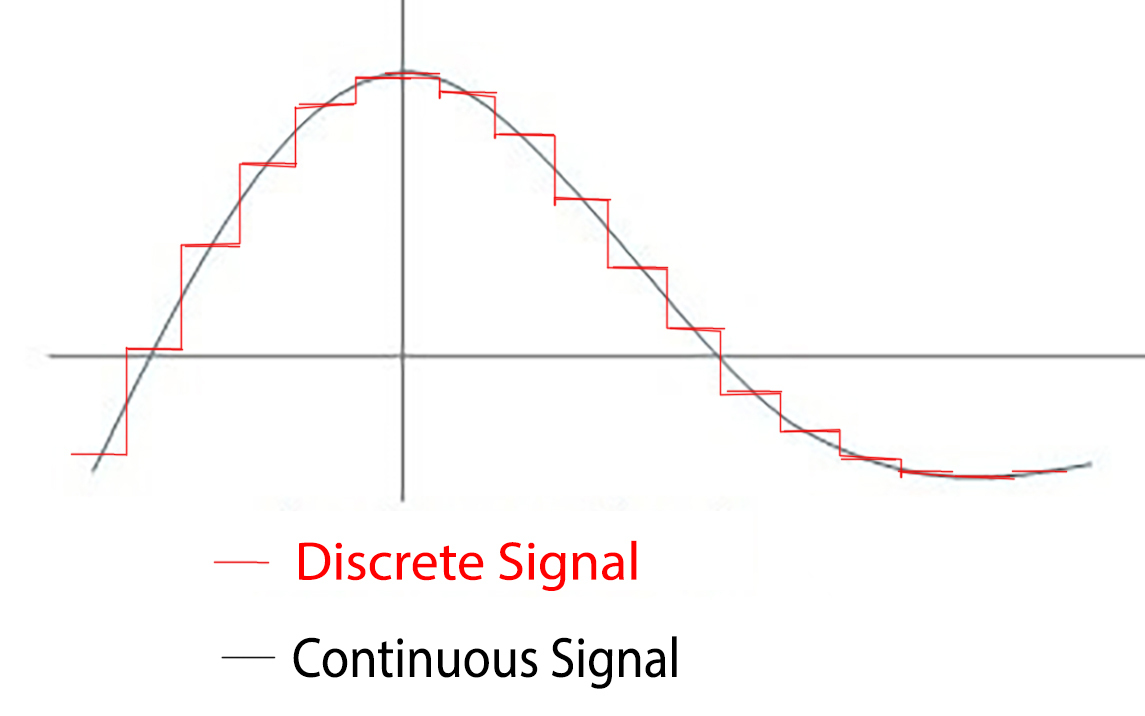 The speed of the cycling of discrete steps in a digital sound signal is known as its sample rate.  The difference in level between each step is determined by the total number of potential steps, known as its bit depth.

As an example, CD audio files have a sample rate of 44,100Hz (Hz stands for Hertz, which is the unit of measurement describing how many times an event repeats each second—meaning it produces 44,100 new audio signal steps every second) and a bit depth of 16 bits (each bit is a binary digit, so that a 16-bit digital signal has a total of 2 to the power of 16, or 65,536 possible numeric values between its minimum and maximum value).

This choice of values for CD audio is not by coincidence. By a formula known as the Nyquist Theorem, this sample rate of 44,100Hz is the minimum required to produce sounds with tones covering the full range of typical human hearing. And the bit rate of 16 bits was the largest that could be easily used and still fit a reasonable amount of sound material on a standard compact disc.

You could say that since a digital discrete signal is merely an approximation of the actual sound, no matter how good it may be it will never fully match the actual exact continuous analog signal and so that should be the end of the argument. Yet the question remains as to whether or not the human brain can actually tell the difference, especially with higher resolution digital audio.

This is a question for neuroscientists, so for our purposes, we’ll avoid that discussion entirely and instead ask the question: “do analog media sources actually produce a true continuous audio signal in the first place?”

Vinyl records are typically made of a semi-rigid form of PVC, or polyvinyl chloride. An analog signal is carved directly into the grooves in the record, thus deforming the PVC material in response to the signal. A needle is used on a record player to “read” these microscopic deformations and thus reproduce the original signal that created them.

The vinyl material, PVC, has a minimum size associated with its molecular and crystalline structures, which in effect means that deformations in the material within the record grooves cannot be altered to any finer scale than its physical properties will allow. So, in essence, it is not truly able to produce a perfectly continuous signal, but rather an approximation of that signal limited by the properties of the vinyl material itself.

You can’t make a cut within the grooves of the record smaller than the size of the PVC material’s minimum molecular size—a single vinyl chloride monomer (also known as a chloroethene molecule).

The PVC used to make vinyl records has a density of about 1.3 grams per cubic centimeter.  And a single vinyl chloride monomer (one molecule of chloroethene) has a mass of around 1.07×10-22grams. That means there are something like 12.1×1021 individual chloroethene molecules within a space of 1 cubic centimeter of PVC in vinyl LPs. The smallest sliver of this material we could cut off one side would be one molecule thick, which we can now estimate to have a thickness of about 4.4×10-8cm.

The groove in a vinyl record can be carved up to a maximum of around .008cm wide, with one half of the groove associated with the left channel and the other half with the right channel. This means the needle can feel a maximum position change for each channel of up to .004cm.

So, the maximum number of molecular slices we could shave out to form that maximum groove size change for each channel would be just about 91,000. This follows the same principle as bit depth for digital audio signal.

In addition, due to the speed the record revolves at on the turntable, the diameter of the record, and the width of the individual grooves cut into the record, it can be shown that there is around 45,000cm of total groove length available to carve the signal into (on each side of the record) that, if filled in its entirety, is played back over a total time of around 1400 seconds at its correct playback speed.

Therefore, we can estimate the needle passes over an average of roughly 730 million individual chloroethene molecules every second during the full playback of one side of the LP. This follows the same principle as sample rate for digital audio signals. It tells us the smallest step that can be reproduced in approximation of the change over time of the original audio signal.

So, with some estimation methods (oversimplified, but valid in a ballpark sense) we can see that a vinyl record produces the same discrete approximation to a continuous audio sound signal as a digital signal with a bit depth of at least 16 bits and a sample rate of 730MHz.

But, don’t get all excited just yet. You can’t simply take all your digital WAV and MP3 files and convert them to 17-bit, 730MHz audio files and tell everyone they’re as good as vinyl. Your approximation of a true continuous audio signal, whether by analog means or digital means, must be maintained at its maximum resolution throughout the entire process to say it meets that standard.

Most analog equipment does this, but most digital equipment does not. As soon as you employ a digital method with anything less than the minimum standard that matches an LP, you will have reduced the accuracy of your approximation. Any later up-conversion to a higher resolution will simply do a better job of reproducing your least accurate approximation applied during your production process.

Plus, while 24-bit and 32-bit digital recordings are easily obtained nowadays, greatly surpassing the effective bit depth of vinyl, the reality is that even the best digital recording equipment available to most people today has a maximum sample rate of 192kHz, which is almost 4,000 times slower than it would need to be to keep up with the effective sample rate of vinyl.

Analog flavor in the production chain

The second part of the question is in regards to how the final product actually sounds. In other words, let’s say at some point in the future, the technology allows for digital audio to achieve the 730MHz or better sample rate we calculated that’s required to match the effective sample rate of vinyl. At that time, with digital audio having the technical potential to meet or exceed the technical potential of analog audio, would digital sound as good or better than analog?

To answer this it’s important to realize that much of what people like in the sound coming from a vinyl is due to the analog production equipment used in recording and mixing, and its particular sonic flavor.

Digital modeling has become very good in recent years and can likely match many of the classic analog sounds people prefer. Of course, the technology would need to allow for the same maximum sound resolution to be maintained throughout the entire process as well.

But, it would seem safe to say that yes—assuming digital audio will eventually achieve the same technical potential for sound reproduction as current analog methods, and maintain that resolution throughout the entire production process, and analog gear or digital modeling of analog gear are used in the process for preferred sound flavoring—digital audio should be able to meet or exceed the performance of analog sound in both technical quality and sound preference.

End of discussion? Well, let’s look at one final consideration.

Let’s imagine the whole process was done in digital format at or above the technical standard that matches analog and uses analog modeling effects at that standard. If we produce a full-quality raw WAV audio file of a three-minute recording, the size of the digital file at that level would be almost 18,000 times as large as a CD audio quality WAV file of the same length, giving it a file size of over 500Gb for a single, short song.

With this massive file size issue, as well as the fact that current digital sampling rates fall far short of the requirement to meet the standards of analog sound, it seems clear that vinyl is still a good choice.

However, with the ubiquity of digital playback systems, continual advancements in digital sound technology, and the option of having media maintained in an entirely virtual environment that doesn’t require storing a large vinyl record and special equipment to play it back, it’s likely only a matter of time until digital sound finally, unequivocally surpasses analog sound.

Create your own music website that’s mobile-ready and easy to update anytime! Build a website with Bandzoogle now.

Erik Veach is the owner and lead audio engineer at Crazy Daisy Productions, providing mixing, mastering, and sound editing services since 2001.  He is the original pioneer of automated intelligent mastering systems, introducing them for use in professional music production in 2003.