Bill Werde’s recent piece debunking the ‘myth‘ that 60,000 songs a day are uploaded to Spotify cause quite a stir. Now he’s back with some new insights.

by Bill Werde, the Director of the Bandier music business program at Syracuse University, and former editorial director of Billboard. An earlier version of this report first appeared in his free, weekly analysis of music business trends and ideas, Full Rate No Cap.

Follow up: Debunking the “60,000 songs uploaded to Spotify a day” myth

Last week, I dove into the “60,000 uploads a day” datapoint that executives and even artists frequently cite. I determined that while it might be technically possible, it was at best a highly misrepresentative number. The practical reality is that far, far fewer songs than that number hit the service daily.

I want to clarify: I’m not implying that Spotify is being dishonest. I’m interested in exploring why this number matters, and how and why the 60k figure is misleading, if not outright untrue.

I got this DM from a very senior executive at a massive music company, with a great breakdown of how this number gets used:

I would add that Spotify also probably loves this number — they obviously do, as they made the strategic choice to share it publicly at one of their events. It helps to cement the perception that they are the place everyone must go to upload anything. And Spotify would in theory also love anything that devalues major label catalogs in any way, as major labels are the most important suppliers they negotiate with.

2. The extent to which it may be true depends on what you consider a “track.”

I was grateful that Alex Kintzer, a researcher for MassiveMusic, reached out after I published last week’s column. He walked me through the incredible Spotify API-based database at EveryNoise.com. Kintzer put together a Javascript scraper and after analyzing April, came up with approximately 40,000 tracks a day that were being uploaded in the US. But take a look at these two screen shots of US releases for the week that includes Friday April 28, and then total album releases for the same time and place. 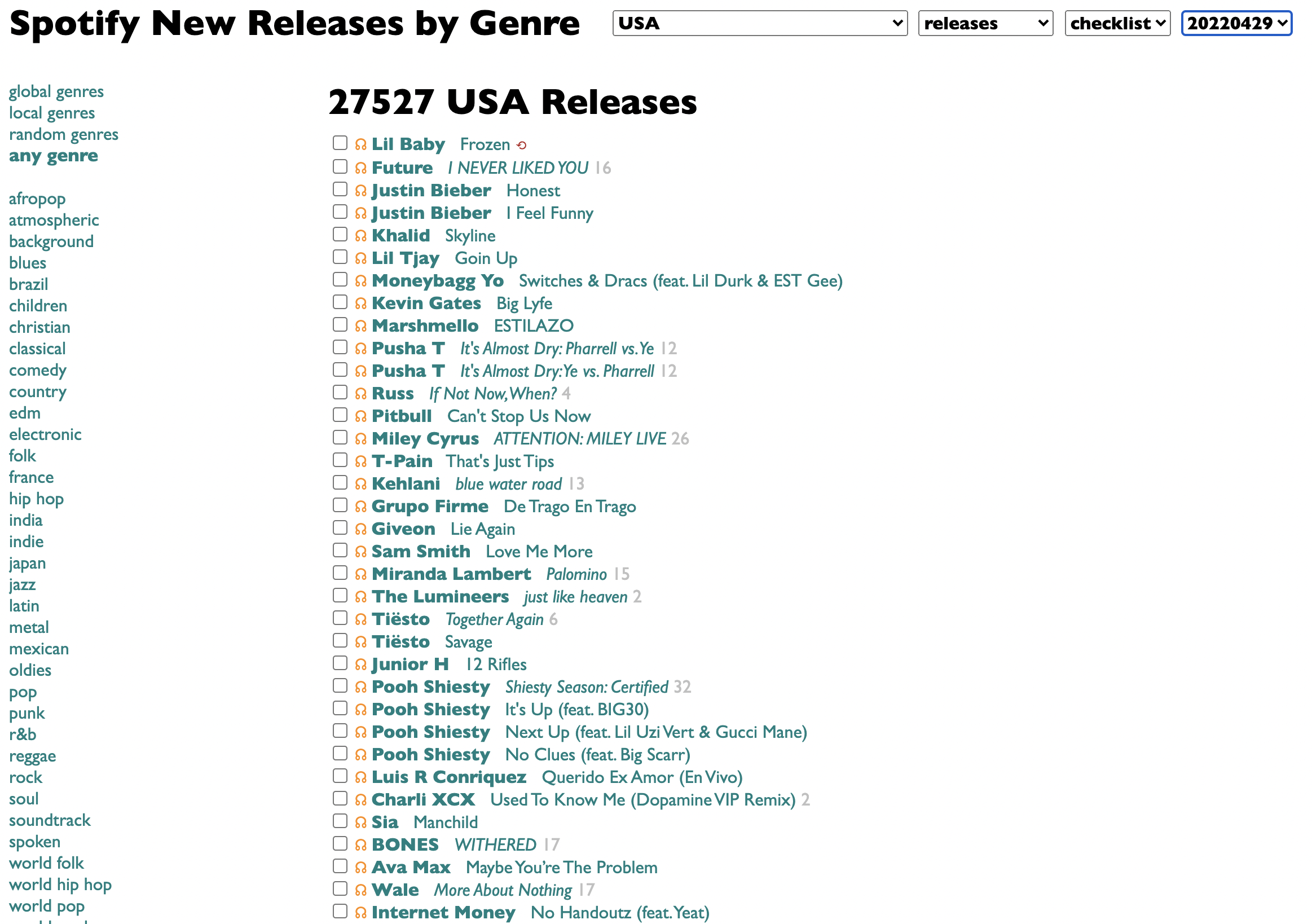 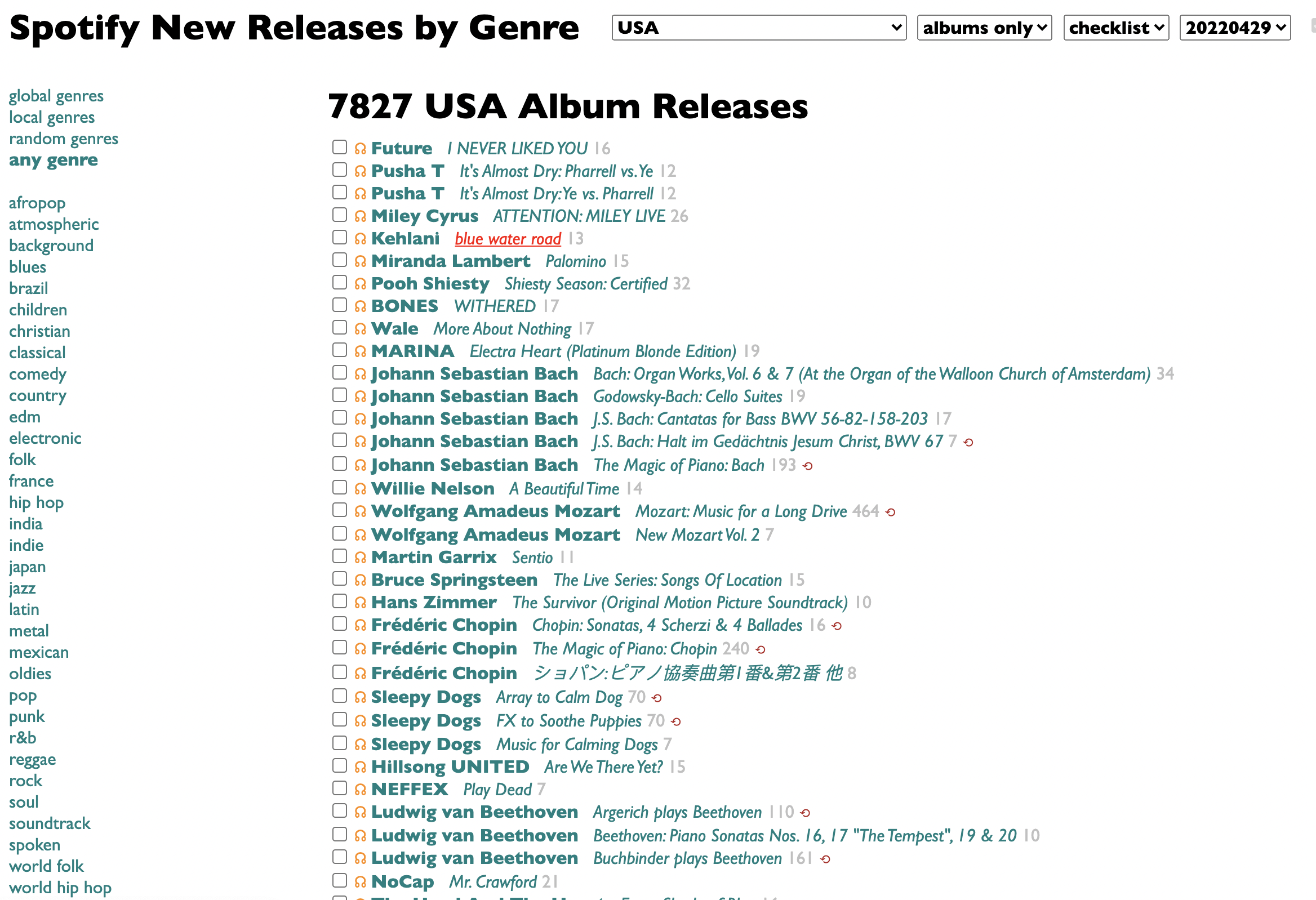 If you zoom in, you can observe that much of what’s listed here isn’t creating meaningful competition for current artists. Included in these lists, for example, are a very high number of classical recordings. Is the nineteenth version of a Beethoven composition on Spotify a new upload? Is a remastered version? Both are technically an upload of course. Is that going to make it less likely that folks are going to hear your new release? In no way. But beyond the classical listings are some other tracks that similarly inflate numbers but dont change dynamics for current musical acts. There are scores and scores of remixes. There are multiple uploads of the same song, but mixed for different countries. I could go on. Take any one-screen segment of the lists that you can generate at Every Noise, and you’ll see that a very meaningful percentage of what Spotify may understandably call “uploads” are not what most folks would consider new music.

3. There is still no confirmed explanation for what is happening to all of these tracks.

I was finally able to catch up with a spokesperson from Spotify who added a twist. “The short answer,” they said, was that “the number of tracks Spotify posts on its website is the number of unique recordings available to listen to in the market with the least number of recordings available, and therefore, by no means the maximum number of recordings or representative, specifically, of every market Spotify operates in.” I pressed for clarification of this. Basically, what Spotofy is saying is that the reason we can’t get to 60K tracks when we look at the total number of tracks they host over time, is that the number of total tracks they list is representative of their smallest market in that regard. But Spotify was unable to provide further clarity on how many tracks their largest market featured. And again, if we trust Kintzler’s programming and analysis–and I do–then the US, which would presumably be Spotofy’s largest market, is seeing an average of 40K daily uploads for April.

It’s also worth noting that a few execs emailed/DMd to question if this smaller number might reflect the number of tracks that get taken down–often because an artist uploads music, discovers no one is listening, and then declines to continue paying their indie distributor. But in this scenario, if Spotify really is seeing 60K uploads a day, then one, that would have to be a full global total, and two, that means they are also seeing about 20K daily takedowns. That would seem… insane?

A clear picture emerges in which artist competition to “break through” is magnitudes less than that 60k number would have you believe.

Combine the math in last week’s FRNC with these numbers shared by MBW last week.”Nearly 80% (78.4%) of artists on Spotify today have a monthly audience on the platform smallerthan 50 people.” Let’s think about this insight in connection with the idea that Spotify is actually netting out about 23k uploads a day–the conservative number we arrived at last week. If we use a one upload to one artist ratio (which of course we shouldn’t—it is very common for one artist to upload more than one track), and we use the MBW percentage, we end up with <5k uploads daily. Now let’s say the average upload is five songs per artist. Practically speaking, this would mean that on any given day, any remotely serious artist is competing with fewer than 1000 acts for attention on a new release. I suspect the number is actually smaller even than that. Because remember, for this use case we can remove podcasts, duplicate International entries and other uploads that aren’t simply an actual new song from an artist. In short, last week I made it nearly three times easier for artists to break through. And this week it’s nearly 25 times easier than that!

Bill Werde is a former Billboard Editorial Director and Director of The Bandier Program for Music and the Entertainment Industries of the Newhouse School of Public Communications at Syracuse University. He pubishes his insightful free Full Rate No Cap email weekly.