Bill Werde is a former Billboard Editorial Director and Director of The Bandier Program for Music and the Entertainment Industries of the Newhouse School of Public Communications at Syracuse University. So when he sets out to debunk a statistic that we (and almost everyone else) have been sharing as fact, we pay attention

by Bill Werde. A version of this essay first appeared in his free, weekly Full Rate No Cap email.

In just the past few months, we’ve seen reports from music industry analysts that the recorded music business will grow explosively by 2030. Goldman Sachs, for example, predicts $80 billion in annual revenue.

MIDiA includes publishing in its 2030 prediction and predicts a robust (and pleasingly specific) $89.1 billion

According to the IFPI, the global recorded biz was worth just under $26 billion in 2021. So uh, congratulations to all of us—the music business will triple in eight years! Start spending immediately!

Here’s an almost-too-easy illustration of the folly of analysts. Just five years ago, Goldman Sachs created headlines in every music trade, trumpeting their bold prediction: the global recorded music biz would be worth $41B BY 2030. EUREKA! But here’s the thing: last year, the global biz was just a hair under $26 billion, and many expect to break $30 billion in 2022. Suddenly, $41B by 2030 feels woefully inadequate. Cue Goldman’s latest report, predicting a global recorded market worth $80B by 2030.

I wouldn’t spend that $80B just yet. Look, there’s lots of reasons to remain semi-bullish about the music business’ long-term prospects. The narrative of conventional wisdom right now is telling us that digital services will continue to boom, thanks largely to growth in international markets. And new tech products will bring a host of new revenue streams. But when we poke at some of these growth targets, well, the wood is soft.

Here’s four hurdles the music biz will need to clear, if we are going to experience the sort of growth that a Goldman Sachs in predicting.

The always-sharp Music Business Worldwide nailed two areas of concern in this piece. First and foremost, streaming revenue, while continuing to grow, is growing at a slower rate. That Goldman Sachs projection basically requires double digital growth for the next decade. But when we look at the last quarter of the major labels, growth has slowed to ≈ 6 percent (blended average of Warner, Universal, and Sony, none of whom made it to double-digit growth). In other words, Goldman Sachs came out and made a bold projection, and then we immediately fell behind in the first available quarter.

Consider these numbers: the global recorded biz grew by ≈ 18% from 2020 to 2021, according to the IFPI. But I believe that was the only year, during the last seven consecutive years of growth, that saw double-digit growth. Even if we could somehow average 10 percent growth per year, that would take the global recorded biz to just over $64 billion–a far cry from the grandiose numbers that some are predicting.

2. Advertising Revenue is in Freefall

MBW also notes the slowdown in advertising revenue. From 2020 to 2021, the RIAA noted a jump from $1.2B to nearly $1.8B in ad-supported streaming revenue. That was ≈ 12% of the recorded U.S. biz last year–not nothing. Those dollars may become harder to come by, given current trends and global economic shakiness. The global slowdown in ad spending is the number one topic in the ad industry trades. And it’s already buckling companies like Meta and SNAP.

3. Investors are Already Backing Away From Some Deals.

BMI wanted to sell for between a reported $1.5 and 3b, but dropped the sales effort when that price tag was allegedly not met. [Bloomberg] And while many questioned whether BMI, long run as a non-profit, made sense for this sort of sale, the article also notes:

“The company is the latest in a series of major music entities that hasn’t convinced a buyer to pay what it wanted. Concord, one of the largest independent music companies in the world, ended its sale process after rejecting every offer as not big enough. Other companies that have explored a sale, including Round Hill Music, Anthem Entertainment Group and Tempo Music, have yet to find a buyer — though they have not publicly ended the hunt.”

Investment dollars aren’t operational — they don’t contribute to the global revenue numbers, of course. But as interest rates spike up and cash becomes more expensive, it would seem that investors are wavering in their confidence on music as a great place to park dollars.

4. All of these boom models are predicated on as-yet-unmaterialized international and emerging market growth

This might be the biggest knock on these models. Don’t get me wrong, I absolutely believe in the enormous, dynamic potential of global markets. In my beloved Bandier Program, we take students on an international benchmark trip, to go experience these markets firsthand. But as pandemics and supply chain issues continue to destabilize global economies–particularly emerging economies, which can inherently provide unique challenges in the best of circumstances — banking on unprecedented, transformative revenue growth from these markets feels like a fool’s mission.

Here’s the bottom line: as the global industry has grown these past few years, the U.S. market has largely paced that growth. Here’s a chart I pulled together, combining RIAA (U.S.) and IFPI (global) revenue numbers, 2018-2021. 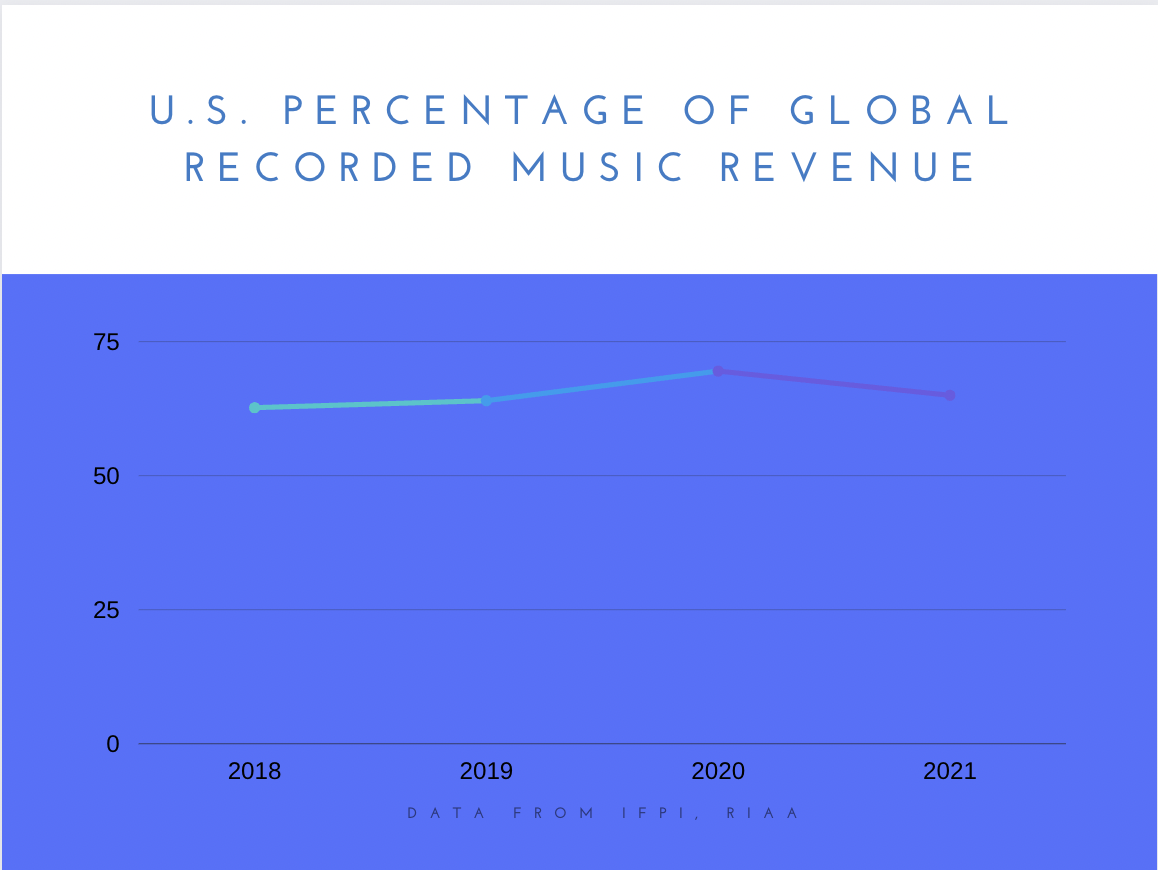 The U.S. is responsible for a higher percentage of global recorded music revenue than it was a few years ago. And while I fully expect that percentage to drop as international revenue ultimately begins to outpace U.S. growth, the million dollar –or in this case, the $80 billion–question is by how much? IFPI’s job is to promote the global music business, so don’t expect bare-knuckled looks at these realities. In their last annual report, for example, there was a very exciting highlight of the Middle East & North Africa Region, trumpeting 35 percent growth. 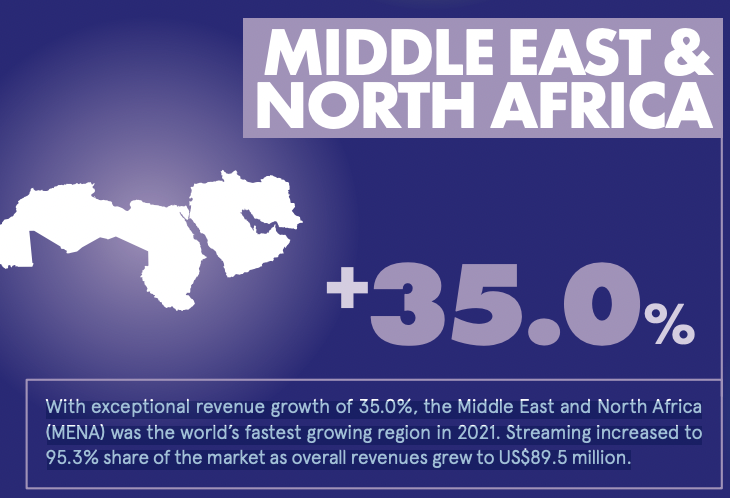 It’s the world’s fastest-growing region! But when you crunch the numbers, that $89.5 million translates to … .003 percent of the global market.

The point here isn’t hopelessness–not at all. Markets and regions like India, MENA, SE Asia, China, Sub-Saharan Africa, and Latin America offer unfathomable creative and commercial promise, and a whole host of stars and styles that will dominate U.S. charts in the years ahead. It’s just that folks need to practice some common sense sobriety when it comes to forecasting growth.

The one country that could change these numbers, and my mind, tomorrow, would be China, because of its scale, and evolved, surprisingly protective copyright law. In December of 2021, more than a billion people in China had access to the internet – that’s more than three total U.S. populations. But for all of the tantalizing promise of China’s rise up the IFPI ranking by country revenue–they were number six last year, up from the high teens just a few years ago–current geopolitics show you just how fraught international growth may be for the music biz in coming years. Another case in point: Warner had built a strong and growing business in Russia, until it was obligated to pull out in May, under growing pressure to do so because of Russia’s invasion of Ukraine. Headlines last week indicate they may have been caught continuing to do business there. These are complicated times.

Bill Werde is a former Billboard Editorial Director and Director of The Bandier Program for Music and the Entertainment Industries of the Newhouse School of Public Communications at Syracuse University. A version of this essay first appeared in his free, weekly Full Rate No Cap email.